Every year, Together publishes the State of Children’s Rights in Scotland report which aims to monitor implementation of the United Nations Convention on the Rights of the Child (UNCRC) in Scotland.  Each report takes a different approach to looking at whether enough is being done to fulfill the human rights of children living in Scotland.

Research for State of Children’s Rights reports is undertaken through a variety of methods, including seminars, surveys, and desk research.  We undertake extensive engagement with our membership throughout this process and much of the evidence we collect for the report draws from our members’ work in policy and practice. 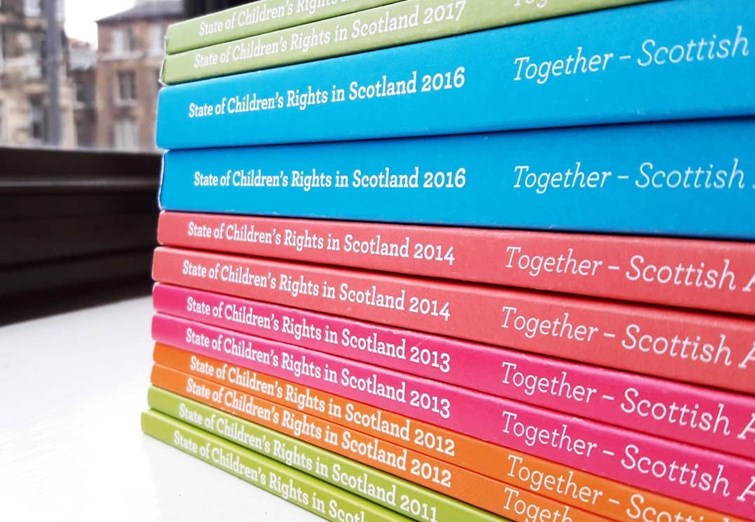 Below you can find brief summaries of each report along with a link to a digital version.  To request a hard copy, please contact info@togetherscotland.org.uk.  In exchange we ask for a small donation to contribute toward printing costs and to cover postage and packaging fees.

State of Children’s Rights in Scotland 2020

The 'List of Issues Prior to Reporting' (LOIPR) for 2020, identifies 30 priority issues for children in Scotland and will inform the initial stages of the UK’s next review by the UN Committee on the Rights of the Child.

It draws upon evidence gathered through our State of Children’s Rights Webinar Series in which over 500 participants took part in, to highlight gaps in legislation, policy and practice, including:

The UN Committee will review all the evidence submitted before publishing its LOIPR in February 2021. The LOIPR will ask the UK and devolved governments to provide information on specific topics. 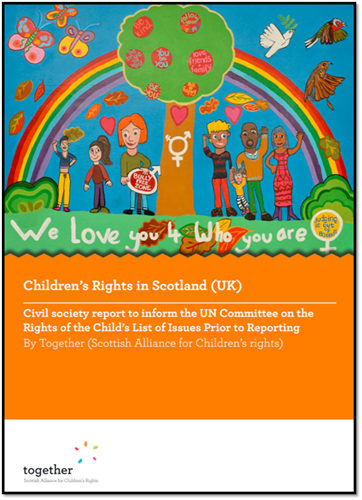 Please note our 2020 report is only available in a digital format.

State of Children’s Rights in Scotland 2019

The State of Children’s Rights report 2019 considers the extent to which children in Scotland are able to exercise their human rights as set out in the UN Convention on the Rights of the Child. It builds on recommendations made to the UK by the UN Committee on the Rights of the Child in 2016. These covered a wide range of issues from education, health, privacy and protection from violence to discrimination. The report draws on information provided by our members to give an update on how these recommendations are being implemented and what more needs to be done.

The UK’s next review by the UN Committee will take place in 2021-22. Together will draw from this report, and wider consultation with members, to inform the UN Committee as to the priority issues impacting on children’s human rights in Scotland. 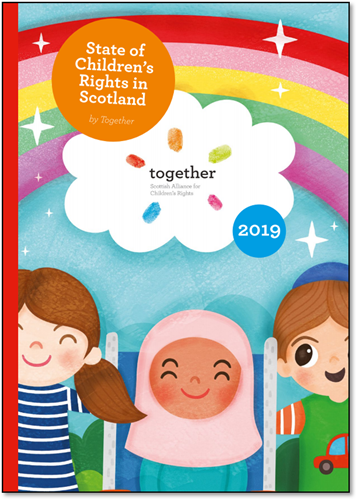 Hard copies are available for our paid up members. If you are not a paid up member, reports are available for a donation of £10 plus postage. We are a small charity with a very limited budget so whilst we're more than happy for everyone to access the online version, we can only afford a limited print run. To request your report, please contact info@togetherscotland.org.uk

Together's State of Children’s Rights report 2019 was accompanied by a child-friendly version, designed to appeal to our young readers.

Together was joined by Maree Todd MSP Minister for Children and Young People, the Children and Young People’s Commissioner Scotland, and members of the Children’s Parliament and Scottish Youth Parliament to celebrate the launch on 28th February 2020. The event jointly celebrated the launch of the Observatory of Children’s Human Rights Scotland of which Together is part, and for which the newly published report will serve as a roadmap for action.

State of Children’s Rights in Scotland 2017

The State of Children’s Rights report 2017 sets out promising child rights-based practice taken by public bodies across Scotland.  It consists of a wide range of case studies from our members, other organisations, and public bodies that illustrate how a rights-based approach can make a significant difference to children and young people’s lives and improve the quality and effectiveness of public services.

The aim of the report is to act as an inspirational and encouraging tool for public bodies to draw from when exploring how to embed children and young people’s rights into their own policy and practice.  The Children and Young People (Scotland) Act 2014 establishes duties on public bodies to report every three years on the steps they have taken to further children and young people’s rights.  The duty commenced on April 2017 and the first reports are to be published in 2020.  Together’s 2017 State of Children’s Rights report can be used as a tool for public bodies to take forward children’s rights as they commence this reporting duty. 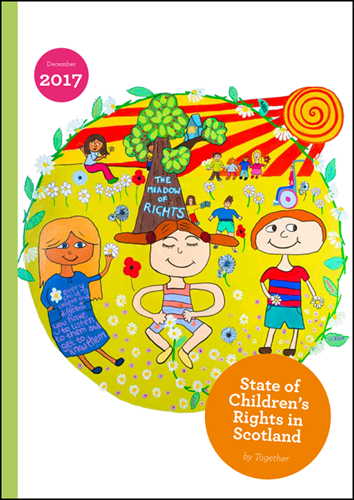 The launch of the report was supported by Together’s #RightsResolution campaign in January 2018, where we asked public bodies to make a commitment to further children’s rights in 2018.

State of Children’s Rights in Scotland 2016

This report offers a baseline against which progress in implementing recommendations made by the UN Committee on the Rights of the Child (UN Committee) and other international treaty bodies can be measured.  It also reflects on areas where progress is being made and identifies where further efforts are needed.

The report was written and published following the 150 Concluding Observations made by the UN Committee during their 5th reporting cycle of the UK.  It aims to provide data and evidence on where Scotland stands on each of the Concluding Observations and makes Scotland-specific recommendations on how the Scottish Government can take these forward. 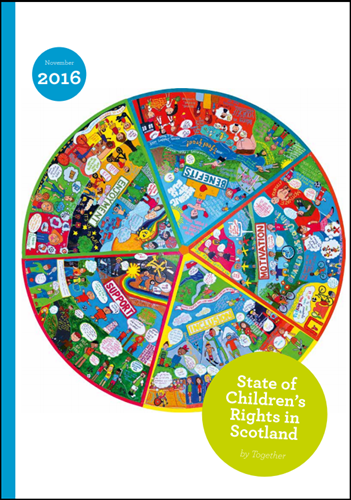 The State of Children’s Rights report 2016 was previewed at a reception held at Scottish Parliament which was attended by Together members, MSPs and the Minister for Childcare and Early Years.  At the reception, Together’s Director highlighted three prominent children’s rights issues from the report and called on Scottish Government to take immediate action on these.  The issues were: raising the minimum age of criminal responsibility; equal protection from violence for children; and the banning of mosquito devices.

The State of Children’s Rights report 2015 acts as the alternative report to the UN Committee on the Rights of Child for Scotland (as part of the United Kingdom) during their 5th reporting cycle of the UK.  The report was endorsed by 66 NGOs and aims to examine progress made since 2008 to further the UNCRC and take forward the UN Committee’s 2008 Concluding Observations.  It provides commentary and scrutiny of the UK State Report, submitted to the UN Committee in May 2014, and examines the Scottish Government report to the UK, submitted in July 2013.

The report includes 109 recommendations for improvements in the implementation of the UNCRC in Scotland. 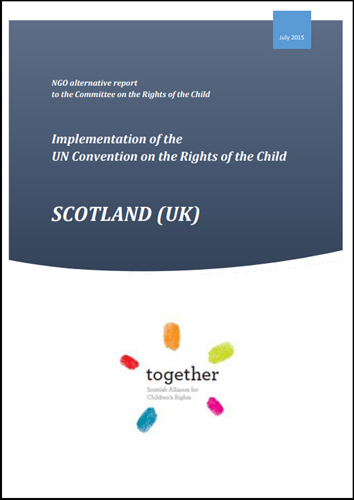 Together’s 2014 report provides a non-government perspective on the extent to which children’s rights, as laid out in the UNCRC, are fulfilled in Scotland.  It reflects on the year since the 2013 report, discussing what progress has been made and where further efforts are needed.

Research for the report involved a series of thematic focus groups on issues including children affected by imprisonment, disability and mental health, and recreation, culture and play.  Further desk research into issues highlighted by Together’s members was then undertaken to add to the evidence collated through the consultations. 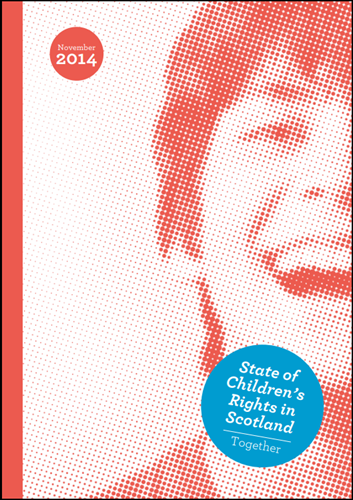 The aim of the State of Children’s Rights report 2013 is to reflect on the progress made in implementing the UNCRC which is outlined by the Scottish Government in it’s submission to the 5th UK Government Report to the UN Committee.  The report also highlights issues that Together’s members have identified as priorities. 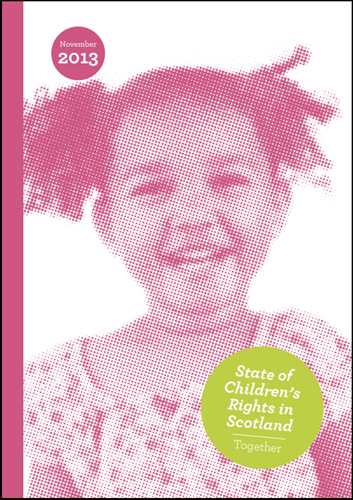 The State of Children’s Rights report 2012 aims to reflect on measures taken to improve the implementation of the UNCRC over the year preceding the release of the report.  The report makes recommendations on what steps should be taken next to improve children’s rights in Scotland and provides a point of referral against which future efforts can be assessed. 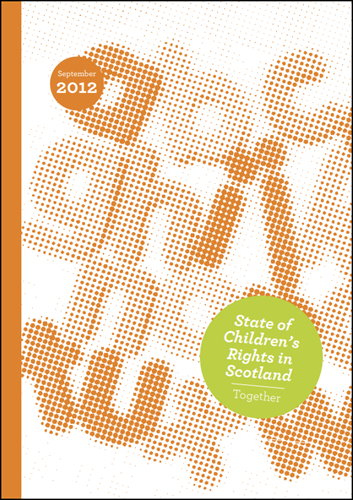 This report was compiled and produced by Together following wide consultation with children’s organisations across Scotland.  Consultation involved gathering views from over 250 professionals working with and for children and young people through seminars held in Ayr, Inverness, Aberdeen, the Scottish Borders and Edinburgh.  This was followed by an online survey completed by 61 organisations working across a range of issues including mental health and wellbeing, disability and domestic abuse. 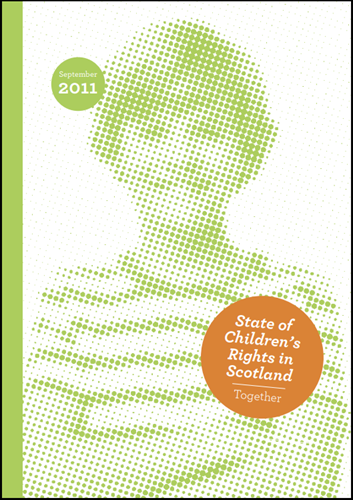 The State of Children’s Rights report 2010 looks at the progress that has been made since the launch of the Scottish Government’s UNCRC Action Plan ‘Do the Right Thing in September 2009.  It explores the key successes and difficulties experienced in enabling children and young people to enjoy the rights enshrined in the UNCRC.  It also provides recommendations as to how further progress can be made. 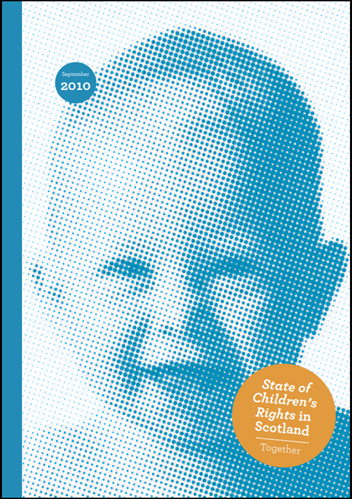