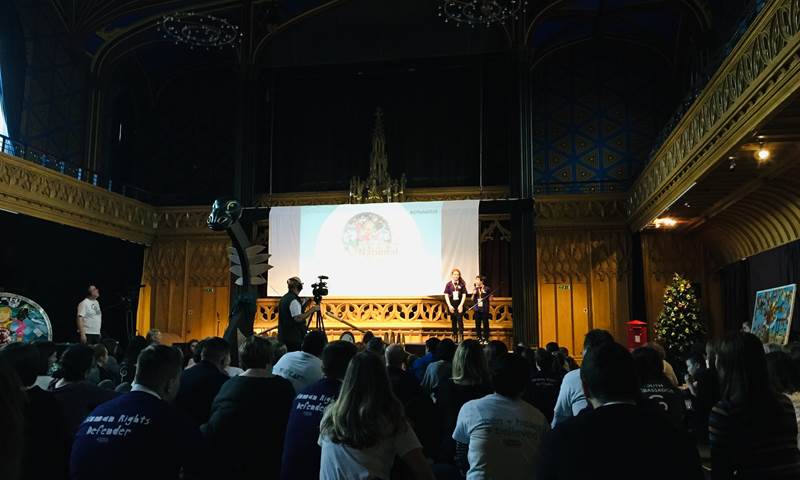 Together joined members from across Scotland to celebrate Universal Children’s Day  on Tuesday 20th November at the Children’s Parliament’s National Sitting in Edinburgh and YouthLink Scotland’s National Conference in Glasgow.

On arrival at The Hub by Edinburgh Castle, adult delegates were greeted by Members of Children’s Parliament and given a tour of the children’s artwork displayed around the room – the five giant shields that were exhibited at the DGD in September; the Imagining Aberdeen mural and Dunkeld & Birnam billboards which children created to illustrate their hopes and ideas for the future of their communities; and the individual shields created by children in the Seen+Heard project.

Discussions throughout the day gave children and adults the opportunity to explore what it means to be a human rights defender in Scotland and how we can work together to ensure children’s human rights are upheld in Scotland.

Mikiko Otani, Member of the United Nations Committee on the Rights of the Child opened the Sitting along with Hannah and Cameron, Members of Children’s Parliament and members of Child Rights Connect’s global Children’s Advisory Team who supported the Committee in planning and delivering the Day of General Discussion in Geneva in September 2018. Mikiko presented the international context surrounding the recognition of children as human rights defenders before sharing her reflections on empowering and protecting children human rights defenders in Scotland. Mikiko endorsed the Scottish Government’s commitment in their Programme for Government to incorporate the principles of the UNCRC, stating “Incorporation will give children the protection they need – like a shield – to help defend their rights!”

Maree Todd, MSP and Minister for Children and Young People, closed the Sitting along with Elisha and Mackenzie, Member of Children’s Parliament who recently participated in the Eurochild Conference in Croatia with Together and members of the Scottish Youth Parliament.