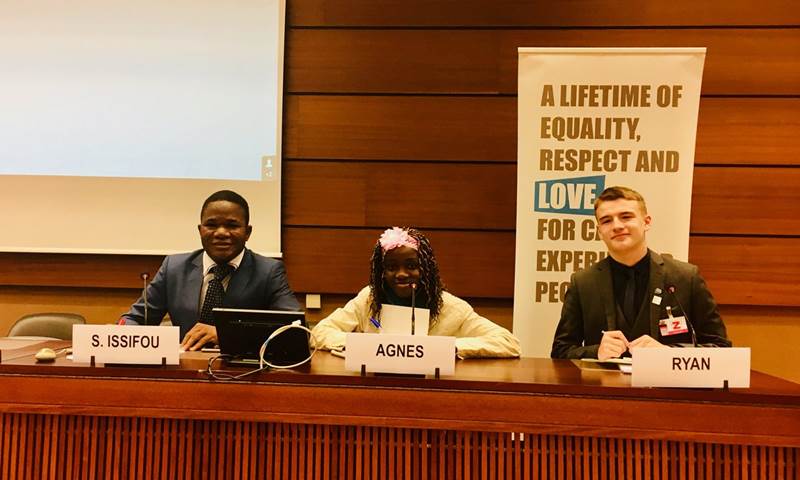 On the 28th September 2018, 17 children and young people from Scotland took part in the United Nations Committee on the Rights of the Child’s Day of General Discussion (DGD) on Children as Human Rights Defenders. The DGD brought children and young people together from all over the world and created a space for them to share their experiences and recommendations as Human Rights Defenders to key international decisions makers.

For the first time, the DGD was designed in collaboration with a global Children’s Advisory Team established by Child Rights Connect with support from Dr Laura Lundy and Dr Michelle Templeton at Queens University Belfast. Hannah and Cameron, 12 year old Members of Children’s Parliament (MCPs) from East Lothian, were the only children from the UK on the Children’s Advisory Team. They had specific roles throughout the DGD from speaking during the Exhibition reception alongside the Director of the UN; the Ambassador for the Norway Mission in Geneva; Mikiko Otani, member of the Committee on the Rights of the Child and Bruce Adamson, Children and Young People’s Commissioner Scotland.

Hannah also moderated one the working groups in the morning session about the role of state actors in empowering and protecting children human rights defenders alongside Amal Aldoseri, member of the Committee on the Rights of the Child.

Hannah and Cameron were supported by ten other Members of Children’s Parliament who took part in the DGD and gave tours of their giant papier-mâché shields, which represent the views of 200 children across Scotland gathered during workshops earlier this year in partnership with the Children and Young People’s Commissioner for Scotland.

Following the exhibition reception, Members of Scottish Youth Parliament hosted their DGD side event "Youth Rights Defenders: Assemble!"  which brought together children, young people and adult participants at the DGD to explore the role of youth parliamentarians locally, nationally and internationally as human rights defenders. MSYPs Suki Wan, Robbie Burgess and Josh Kennedy led the event, highlighting how they defend the rights of the young people they represent, what challenges they face, and lessons that can be learned from their experiences.

The session was chaired by, Bruce Adamson, and included an address from the Minister for Children and Young People.

“The rights in the UNCRC should be defined as love. The UN should ensure everyone recognises the importance of love as a right – and that as Scotland incorporates the UNCRC, it’s a reality for every child.”

The DGD was live web streamed throughout the day, which allowed for 99 representatives from 66 countries to participate remotely. There are now video recordings available to watch (currently in English only) if you wish to watch or revisit the different sessions that took place throughout the day:

Child Rights Connect is gathering DGD-related materials such as media links, videos and DGD hubs feedback in order to document the impact of the DGD and propel the global movement forward. If you have any material to share, please email to secretariat@childrightsconnect.org