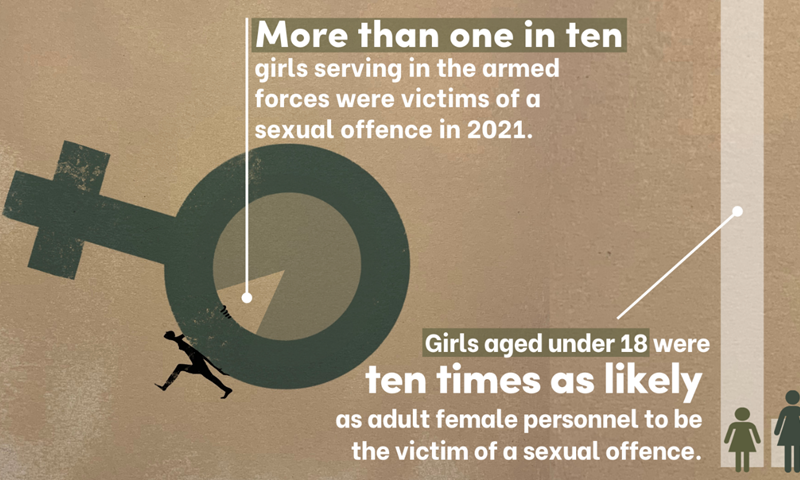 Charlotte Cooper, Campaigns Coordinator at CRIN, gives an update of their campaign to end recruitment of children by the British armed forces. She writes about their activities in the first half of 2022.

A long-read investigative piece in VICE World News has shed light on the abuse of young people - especially girls - in armed forces training. Using testimony from former recruits, and some of CRIN’s own research, the piece challenges the myth that armed forces recruitment without deployment is safe for children; the risks begin from the moment they start training.

Shockingly, the article revealed that last year, more than one in ten girls aged under 18 serving in the armed forces were victims of a sexual offence; ten times the rate for adult female personnel. It also revealed that in 2021 alone, military police investigated 22 sexual offences against recruits at the Army Foundation College - the dedicated training base for recruits aged under 18 - and in one investigation the suspects were three staff at the base.

One of the former recruits who spoke out for the VICE piece is Joe, who trained at the Army Foundation College in 2013-14 aged 16-17. We encourage you to read his powerful story in full here.

Next week we are chatting with Joe live on Instagram about his use of theatre to process childhood trauma and to address injustice: join us on 11 Aug at 4pm (UK time), details here.

Briefing: welfare concerns for under-18s in the armed forces

We have compiled all our recent evidence regarding welfare concerns for under-18s in armed forces training - especially the risks of physical and sexual abuse - into a two-page briefing, available here.

A recent editorial by Dr Katharine Campbell in the BMJ - Childhood trauma: a major risk factor in the military recruitment of young people - shows that the youngest armed forces recruits, and especially those who have experienced adversity in childhood, are the most vulnerable to long-term mental health problems, including suicide. It concludes “The British Armed Forces need to review seriously their deliberate targeting of socioeconomically deprived young people and understand the personal cost of this policy to them, the military itself and to the government.”

New webpage for the campaign

We have created a new webpage for the campaign. We will soon be adding a section compiling the essential resources on this issue and our recent media coverage.