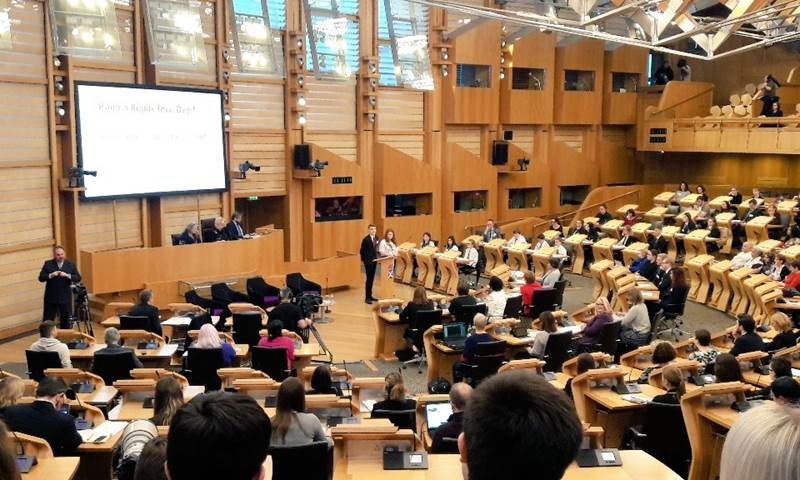 Together took part in the Scottish Parliament’s Human Rights Day Takeover, a one-day conference to mark the 70th anniversary of the United Nations adopting the Universal Declaration of Human Rights. Throughout the day, there was a strong focus on the rights of children and young people and the role children and young people play in defending human rights across Scotland and internationally.

Hannah, 12-year-old Member of Children’s Parliament and member of Child Rights Connect’s global Children’s Advisory Team for the Day of General Discussion, and Ryan McShane, MSYP for Who Cares? Scotland spoke in the Chamber about their experiences as human rights defenders, including their involvement in the DGD as a panel moderator and panel speaker, respectively. Ryan called on the First Minister, who was in attendance, to become the “ultimate human rights defender” and incorporate the UNCRC fully into Scots Law within this parliamentary term. Hannah echoed this sentiment, stating:

“We just need adults to believe in us and to support us to make Scotland the best place in the world to grow up in.” - Hannah, MCP

After their closing remarks, Hannah and Ryan introduced the First Minister to give her address to the Chamber. The First Minister outlined the recommendations highlighting in her Human Rights Advisory Group’s report (launched that morning) and emphasised her commitment to further embedding human rights into policy and legislation across Scotland. Responding to Ryan’s calls for incorporation of the UNCRC, she stated:

“Next year, 2019, will be when we’ll take important next steps in our commitment to incorporate the UNCRC.”

Following the First Minister’s speech, children and young people from Oban performed a series of their own poems on the theme of human rights to the Chamber which can be watched in full here.

The 12 child human rights defenders from East Lothian who participated in the DGD showcased the giant shields and their own individual shields at the lunch reception in the Parliament, giving tours to delegates and highlighting their journey as human rights defenders through working with Children’s Parliament and the Children and Young People’s Commissioner Scotland.