Date: 11th March 2020
Category: Respect for the views of the child, Incorporation 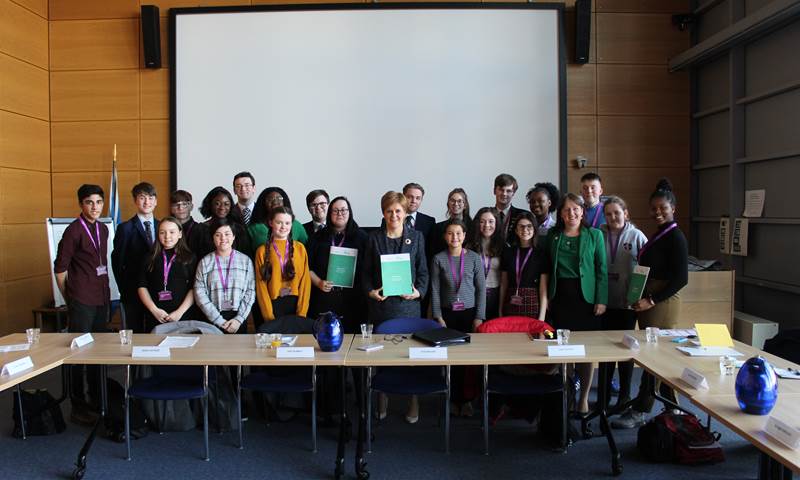 The letter thanked her for the opportunity to meet on 3rd February 2020 and discuss Panel members’ key Brexit-related concerns and priorities, and emphasised the importance of children and young people’s ongoing participation in the process.

Members of the Panel underlined that the 3rd February meeting allowed them to ask questions about a range of issues important to children and young people including:

Panel members were pleased that some of the First Minister’s answers supported recommendations from their 2019 report - Listen To Us. This included a commitment to do everything possible to make the UNCRC law before May 2021, and an intention for Scotland to stay part of Erasmus+ as far as possible.

The Panel acknowledged that some of their questions were difficult for the First Minister to answer because things were still unclear or because specific powers lie with the UK Government. They noted the need for sharing information in an accessible way when this becomes available.

The letter also posed several questions to the First Minister that Panel members did not have a chance to raise at the meeting and their expectation that the meeting would be part of an ongoing conversation between Scottish Government and the Panel, and with children and young people more widely.

At the meeting, the First Minister and the Minister for Children and Young People emphasised the importance of hearing children and young people’s views and taking these into account in informing Scotland and the UK’s post-Brexit decision-making processes.

Speaking after the meeting, David Mackay, Policy and Projects Manager at Children in Scotland said:

“Coming just three days after the UK left the EU, the meeting with the First Minister and the Minister for Children and Young People was a timely opportunity for the Panel on Europe to speak about the key issues that are important them.

The Panel enjoyed sharing recommendations from their ‘Listen to Us’ report and asking the First Minister a range of candid questions about the Scottish Government’s plans in relation to Brexit. The Panel has written to the First Minister to thank her for the meeting and to request her support in ensuring their voice is heard as our new relationship with the EU is negotiated.”

The Panel formed in August 2018 and is supported by Together in partnership with Children in Scotland.